The Campaign for a Commercial-Free Childhood (CCFC) is a consumer-advocacy group whose stated mission is to “support parents’ efforts to raise healthy families by limiting commercial access to children and ending the exploitive practice of child-targeted marketing.” Each year, they announce their worst toy of the year, which has the dubious distinction of being given the TOADY (Toys Oppressive And Destructive to Young children) award. While in the past toys with potential for injury headed the list of worst toys, this year’s TOADY award finalists were toys that involved cell phone technology, unhealthy foods, and what they consider to be inappropriate gender-marketing.

This year’s worst toy was the Laugh & Learn Apptivity Monkey from Fisher-Price. This toy, a stuffed monkey that holds an Apple digital device, is marketed for children 6 to 36 months of age. Fisher-Price promotes the Apptivity Monkey as the “best of both worlds for baby—a soft, cuddly friend to hold and hug, plus fun interactive learning with your iPhone or iPod touch!” This is counter to a policy issued by the American Academy of Pediatrics (AAP) that discourages TV and other media use by children younger than 2 years. 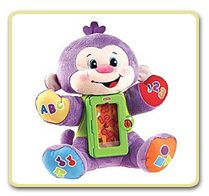 Two other contenders for the TOADY award, TheO Ball and Put Me in the Story app also utilized cell phones or cell phone apps. With the questionable goal of promoting physical activity, TheO Ball was designed to “hold your phone within its cushioned grasp, allowing you to literally throw your phone around to play games without fear of damage.” Put Me in the Story app, allows popular children’s stories to become e-books starring their own child. Many voters felt that this placed too much emphasis on the “me” and was a poor substitute for interactive book reading involving parent and child.

Other top five contenders included LEGO’s Butterfly Beauty Shop and the 7-11 Slurpee Machine. The Beauty Shop encourages girls to “get primped and pretty and have some serious salon fun”. CCFC felt that this toy promoted condescending stereotypes. Concerns regarding the 7-11 Slurpee Machine centered on children creating sugary treats that could lead to obesity or diabetes.

On the other side of the coin were Good Housekeeping’s Best Toy Awards 2012 and Parenting Magazine’s Best New Toys of 2012. In selecting their toys, Good Housekeeping considered those that incorporated “creativity, skill-building, problem-solving, and strategy”. One hundred thirty-five different toys were “tested” by 140 children in laboratory and home settings to determine the 24 toys that made their best list. Editors from Parenting Magazine selected their best toys after attending the American International Toy Fair in New York. Twenty-five toys made the cut as the “Best in Play” for 2012.

A few of the toys that made at least one these lists are mentioned below:

To see more of the best toys from 2012 by Parenting Magazine and Good Housekeeping, follow the links above.