Each year, in the United States, over a half million women undergo removal of the uterus (hysterectomy). Along with removal of the uterus, the ovaries and fallopian tubes are usually taken also. While this procedure may relieve troubling symptoms, loss of these important organs can have adverse long-term consequences on a woman’s health. Fortunately, a number of less invasive and drastic procedures are available that may be appropriate as an alternative to hysterectomy. 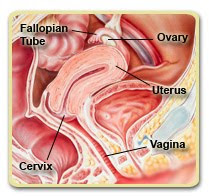 The major, non-cancer related reasons for performing a hysterectomy are uterine fibroids, uterine prolapse, severe uterine bleeding, and endometriosis. In each of these conditions there are treatments that should be considered prior to resorting to hysterectomy, though this may not be the case with cancer involving the pelvic organs. With cancer of the uterus or ovaries, hysterectomy may be the most reasonable treatment option.

Uterine fibroids – These benign uterine growths, also known as leiomyomas, are the most common reason for a hysterectomy. There is essentially no risk of these tumors becoming malignant. As long as fibroids are not causing symptoms, it is reasonable to just monitor their status. Treatment is considered when fibroids become excessively large, cause heavy bleeding, or produce pelvic pressure and pain. If a woman with fibroids is approaching menopause, it is reasonable to wait on treatment since they typically shrink in size and become less symptomatic during this period of life. This is also the rationale behind use of a hormonal treatment using medications known as GnRH agonists that block the effect of estrogen on the fibroids. The downside of this “chemical” treatment is that women usually develop some of the symptoms of menopause.

Uterine artery embolization (also known as uterine fibroid embolization) is a non-surgical procedure in which small particles are injected into the arteries feeding the fibroid. This cuts off the fibroid’s blood supply and causes it to die. This procedure is typically performed by an interventional radiologist instead of a surgeon, and is successful in a high percentage of cases.

Myomectomy is a less invasive surgical option for uterine fibroids than a hysterectomy. This procedure involves the surgical removal of the fibroids alone. Depending on the size and location of the fibroids, it can be done through an abdominal incision, laparoscopically (entering through smaller abdominal incisions), or via hysteroscopy (inserting a thin, telescope-like instrument through the vagina. Myomectomy may be the best treatment option for a woman who is still interested in having children, particularly if the fibroids are interfering with fertility. Unlike hysterectomy, none of these treatments represents a permanent “cure” for uterine fibroids since new fibroids could develop.

Uterine prolapse occurs when the uterus drops from its normal position because of loosening of its supporting muscles. One of the most common causes for this is vaginal childbirth. In milder forms, the use of pelvic floor strengthening (Kegel) exercises or, in postmenopausal women, hormone replacement therapy may help. When more severe, a pessary, which is a rubber or plastic doughnut-shaped device that fits around or under the lower part of the uterus (cervix) can be used to help hold it in place. Uterine suspension is a surgical procedure that involves putting the uterus back into its normal position by reattaching pelvic ligaments or by a special material that serves as a sling to support the uterus in its proper position.

Menorrhagia, or heavy vaginal bleeding, can develop for a number of reasons including fibroids, endometrial polyps, hormonal changes, infection, and cancer. Treatment is usually directed at the specific cause, but often, this is never determined. In these instances, treatment options include dilatation and curettage (D&C), in which the lining of the uterus (endometrium) is removed, and medications such as birth control pills, GnRH agonists, and non-steroidal anti-inflammatory medications. With persistent menorrhagia, a procedure known as “endometrial ablation” can be considered. Endometrial ablation is a procedure that destroys (ablates) the uterine lining. It is a minimally invasive procedure performed by inserting an instrument through the cervix and into the uterine cavity. A number of methods including use of a laser, electricity, freezing, heating, or microwave energy can perform the ablation. In most cases, this is an outpatient procedure with minimal recovery time. Endometrial ablation is not recommended for women who wish to become pregnant in the future or who are past menopause.

Endometriosis develops when tissue that behaves like the lining of the uterus (endometrium) grows in other areas of the abdominal cavity, such as the ovaries, fallopian tubes, or outer surface of the uterus. Symptoms of endometriosis include pelvic pain, painful intercourse, spotting between periods, and infertility. Initial treatment of endometriosis usually involves taking over-the-counter or prescription pain medications, oral contraceptives, or hormonal medications that reduce estrogen levels. If medical treatment is unsuccessful, surgery may be required, but in most instances does not require removal of the uterus. Laparoscopic surgery to remove the endometrial growths or burn them away may be all that is required. In more severe cases, an open surgical procedure may be necessary to completely remove the endometrial implants, leaving the uterus and ovaries intact.

In no other part of the world is hysterectomy performed as often as in the United States. Because of the potential for long-term consequences, women should be aware of the alternatives to a procedure that can be life saving, but can also be avoided in many instances.