Along Came a Spider…

Black widow spider (Latrodectus mactans)   The female black widow spider is a shiny, inky black spider that measures (including its legs) anywhere from one-half to one inch in length.  The male is much smaller and does not cause envenomation in humans.  The most distinguishing characteristic is a red to orange-colored marking on the underside of its abdomen in the shape of an hourglass.  Black widow spiders are found throughout the U.S. and prefer to live in undisturbed areas such as woodpiles, sheds, crawl spaces, basements and garages.  The venom of a black widow is a type of neurotoxin, meaning it attacks the nervous system. The bite is said to feel like a pinprick and sometimes the two fang marks can be seen.  Within a few hours, though, intense pain at the site of the bite begins. Systemic (affecting the entire body) symptoms of black widow envenomation include nausea, restlessness, sweating, increased blood pressure, severe abdominal pain, muscle spasms and fever. 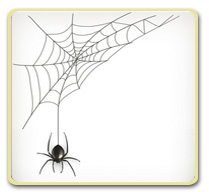 Brown recluse spider (Loxosceles reclusa) The brown recluse is named for its habit of hiding in dark locations such as attics, closets, and woodpiles.  Their range is primarily in the Midwest and South Central United States.  They are sometimes called “fiddle back” spiders due to a violin-shaped marking on their backs (cephalothorax).  This spider is golden brown in color and its size ranges from one-quarter to three-quarters inches in length. The bite produces a mild stinging, followed by local redness and intense pain within eight hours. The wound may take on a bull’s-eye appearance, with a center blister surrounded by an angry-looking red ring and then a blanched (white) ring. Tissue at the site of the bite and the surrounding area dies and eventually sheds. Systemic symptoms include fever, chills, nausea, vomiting, and muscle aches.

What to do if bitten by a spider.  If it can be done safely, identification or collection of the spider can assist the doctor in managing the bite. First-aid measures for black widow or brown recluse bites include cleaning the wound, applying cool compresses and taking a mild pain reliever, such as acetaminophen (Tylenol).  Since the extent or seriousness of the envenomation may not be apparent shortly after the bite, it is a good idea to seek medical attention.  Development of systemic symptoms clearly warrants medical evaluation.
Most black widow spider bites do not cause serious complications and can be managed with pain medications, benzodiazepines (e.g. Valium) for muscle spasms and, administration of tetanus prophylaxis.

For more severe symptoms, such as increasingly severe pain, dangerously high blood pressure, and generalized muscle spasms, black widow antivenom is available. This should only be administered under the careful supervision of a physician since severe allergic reactions, including anaphylaxis, have occurred.  Rather than being toxic to the nervous system, the venom of the brown recluse primarily causes tissue destruction at the site of the bite.  With careful wound care, sometimes including treatment with antibiotics, most of these bites heal without complications. Often, weeks of treatment are necessary until the skin is completely healed.  Occasionally, because of severe tissue damage, surgical debridement or skin grafting may be required.

In spite of the general perception that spiders are dangerous, they are actually quite beneficial in controlling insects.  Most envenomations occur as a defensive measure when humans encroach upon the spider’s habitat.  Spider-related fatalities are rare, usually only occurring in small children, the severely ill, or in the elderly. In fact, most people who go to the doctor because of a “spider bite” actually have some other skin problem.  Particularly in the areas of the country that venomous spiders are not known to live, a more likely explanation for a “spider bite” is a methicillin-resistant Staphylococcus aureus (MRSA) skin infection.

If you have any questions about spider bites, please log into your account and send
us your question. We are here to help.