The abuse of prescription medications, especially those in the opioid class of drugs (e.g. Vicodin, Lorcet, Oxycontin, others), has reached epidemic proportions in the U.S.  It is estimated that more than 2 million Americans suffer from substance use disorders related to these medications that are typically prescribed for pain relief. 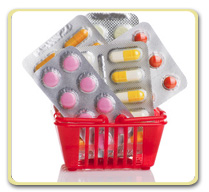 Inappropriate use of medications, however, is not confined to prescription drugs.  A recent report in the Annals of Emergency Medicine describes two cases of abuse of a popular over-the-counter (OTC) anti-diarrhea medication, both resulting in death.  The active ingredient in this medication is loperamide, marketed as Imodium or as the generic, “Anti-Diarrheal Loperamide”.  Loperamide is a very mild opioid, however, taken in high quantities it also has mind-altering properties similar to prescription opioids or heroin.  Unfortunately, at these doses, loperamide is also capable of causing serious side effects, including mental slowing, breathing problems, and heart rhythm irregularities.

But loperamide is not the only OTC drug with abuse potential.  Today’s Health Tip discusses some of the more commonly abused medications that don’t require a prescription for
purchase.

Decongestants— Pseudoephedrine is a decongestant that is used to relieve nasal congestion caused by colds, allergies and hay fever.  It can also be used to manufacture illegal methamphetamine (“meth”).  Prior to 2006, pseudoephedrine was an active ingredient in many OTC cold medicines.  Following passage of the “Combat Methamphetamine Epidemic Act”, the sale of pseudoephedrine became more restricted.  Currently it is available “behind the counter” requiring a photo ID for purchase with a limit on the amount that an individual can buy each month. The same restrictions apply to phenylpropanolamine, which had also been included in many OTC decongestants.

Cough suppressants—Dextromethorphan is a cough suppressant present in many OTC cough and cold remedies.  The letters “DM” attached to the names of many of these medications denotes that it contains dextromethorphan.  Its street names include DXM and “robo”.  Large doses produce a high and can cause hallucinations. Toxic symptoms include anxiety, confusion, rapid heart rate and respiratory depression.

Antihistamines—Dimenhydrinate, marketed as Dramamine in the United States is an OTC antihistamine used primarily for the prevention of motion sickness.  Ingesting high doses can alter one’s mental state producing euphoria and hallucinations.  Diphenhydramine, the active ingredient in Bendaryl, is taken therapeutically for several reasons including producing sedation and for allergy symptoms.  OTC medications that include the letters “PM” most likely include diphenhydramine for its sedative properties. In some people, taking high doses of diphenhydramine can produce hallucinations. Toxic symptoms include agitation, confusion, tremor, convulsions, delirium, and coma.

In addition to these OTC medications, certain plant and herbal supplements also have abuse potential.  Included in this group are salvia, a hallucinogenic herb related to the mint family, and Ma Huang, a traditional Chinese medicine with the stimulant ephedra as its active ingredient.

In general, OTC drugs, taken at the labeled dosages are safe.  When misused (taken at higher dosages or at more frequent intervals than recommended) or abused (taken for a non-therapeutic effect) they can be as dangerous as any other type of medication or drug.

Sources for article:
Loperamide Abuse Associated With Cardiac Dysrhythmia and Death from the Annals of Emergency Medicine